44. YOUR BATTERY IS FINE, YOUR APPS ARE NOT!

Mobile devices
It is nearly guaranteed that every consumer has looked at least once at their mobile device in total bewilderment, wondering how their battery came to be depleted. If it happens more than once, they begin to suspect that they battery is defective or has gone bad. In reality, before suspecting that the battery is defective, they should inspect their power usage, examine whether an app has gone rogue and is responsible for the battery drain. Naturally if you battery is old, say one or two years, then you should suspect that the battery may need replacement. So let’s do a couple of debugging checks.
1. Has your battery gone bad?
A few Android phones are capable of reporting the capacity of the battery. For example, dialing the following sequence *#*#7378423#*#* on your Sony Xperia Z device gives you access to a host of tests including reading the actual battery capacity in mAh. But if your mobile device does not have this feature, then one simple trick is to measure the charge time of your mobile device and compare it to the charge time when it was new. Yes, I know, it is not ideal but it gives a good indication of lost capacity. Make sure your screen is off, all of your apps are shut down, and you use the same AC adapter rating. If your measured charge time is 20% shorter than what you measured for a new phone, you can suspect a bad battery.

Unfortunately, some apps especially in the Android universe are improperly designed and can be suspect of excessive power usage, and consequently faster battery drain. Additionally, the consumer behavior has a big impact on battery drain. If your app is using the radio or GPS (location services) continuously, your battery will drain fast. The good news is you can now detect this in both Android as well as iOS 8.1.
In Android, go to Settings>Battery. In iOS, go to Settings>General>Usage>Battery Usage. You will see screens like the ones shown below. 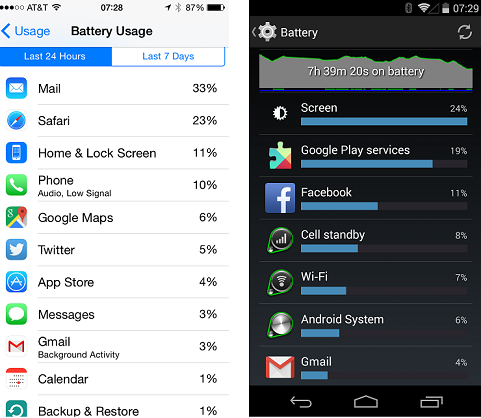 Both screens will list the approximate usage pattern as well as the apps or processes that are consuming power. I say approximate because each operating system will add its own interpretation on top of inexact measured battery numbers, but the screens do offer a reasonable guidance on what is draining your battery charge. In the case of Android, you will notice that “Screen” seems to top the charts. That’s because it does take a lot of power to maintain the lighting of the LCD screen. Scroll through your list and identify what is potentially a rogue app. Then either delete it and reinstall it, or if you can live without it, then do so. In some cases, your rogue app may be operating constantly in the background, so be sure to turn off background services.