47. THINNER IS NOT BETTER

What does the new iPhone 6, Samsung Galaxy A7, Huawei Ascend P6 have in common? First, they are amongst the thinnest mobile smartphones ever made. The iPhone is 6.9 mm. The A7 is a mere 6.3 mm and the P6 comes in at a paper-thin 6.2 mm. Thickness, or lack thereof, does make these devices quite elegant.

The second thing they share: They have amongst the smallest battery capacities, and consequently struggle in delivering a long battery life. In comparison, the smartphones with the best battery lives, for example, the Sony Xperia Z3, clocks in at 7.3 mm, a whole millimeter thicker than the Samsung device.

Naturally, a thicker phone allows the use of a thicker battery. That extra millimeter may not sound a lot, but it adds an extra 15-20% of capacity to the battery. That translates to about 350 – 500 mAh more in capacity, or 2 to 4 hours of additional use time.

But the impact is more meaningful than that. A thin battery suffers from a dramatic drop in energy density. Let’s look at the chart below that shows a survey of several batteries from one of the leading manufacturer. It shows how steeply the energy density drops with every millimeter of thickness that is removed. 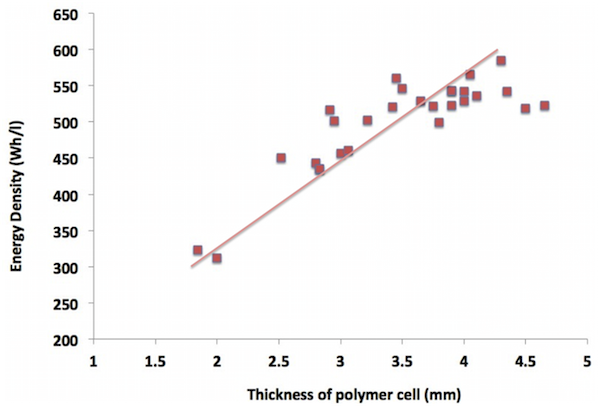 Let’s take the Sony Xperia Z3 as an example. It is 7.3 mm thick. Its battery is about 4.5 mm thick. Its energy density is nearly 600 Wh/l. Shaving one millimeter from the battery thickness yields a serious loss of energy density, down to about 500 – 525 Wh/l, or about 15%. This is in addition to the volumetric loss of ~20% that I mentioned earlier. In other words, the total loss of capacity is now approaching 35%, or more than 750 mAh, corresponding to several hours of use time that the end consumer no longer gets to have. Put a little differently, the cost of shaving one, just one, millimeter of thickness from your elegant smartphone device is equal to 5 or more hours of lost use time to you. So, next time you go shopping for a smartphone, ask yourself a simple question: Elegance vs. Practicality? If you favor elegance, then go thin, but now you can’t complain about your battery.

But why is the effect so dramatic? If you recall from an earlier post, a lithium-ion battery is made of alternating layers of cathode-anodes separated with a “separator” material. The active material, i.e., the stuff that is actually responsible for storing the electrical charge constitutes only a fraction of this layered arrangement. In other words, there is an “overhead” of extra material that needs to be there, but does not really contribute to storing energy. When the battery becomes thin, the contribution of this “overhead” becomes much more prominent, thereby reducing the amount of active material available per unit volume, and hence reducing the energy density. It’s pure geometry.

Of course, one can try to increase the amount of active material in this small volume. For example, one can “compress” more of the graphite material in the anode. But these come at a cost: the charge rate and the cycle life of the battery drop very rapidly. So once again, this goes to illustrate how the battery manufacturers are hitting the wall!