48. THE LITTLE COMPANIES THAT COULD

Imagine a world where your device, whatever it may be, has a source of energy — may be a battery, may be not — that lasts, I mean lasts to the point you don’t think about the period. It lasts in its operation and lasts in its longevity. If you ever find yourself with a low energy level, and I mean ever, then it’s only minutes before your device is recharged. And yes, the energy source is so tiny that you can’t even point at it. I know, this is in a distant universe, but why is it so distant? After all, a drop of gasoline has enough energy to power a mobile device for days or weeks, and one can replenish this source of energy in no time. And you don’t have to worry about it going bad. So will we ever get there? Yes, with time, patience and lots of effort, in other words, dollars, sweat and time. You have got to believe that StarTrek will happen in this distant future, and we will have dilithium fuel to power everything.

But who’s participating in this effort? Is there hope? This blog sheds some light on the numerous companies, many of which are innovative startups, that are trying to change the world on this front. Two types of energy storage seem to garner interest and development effort: Fuel cells and batteries. I will focus here on batteries, especially lithium-ion batteries that are applicable to mobile devices.  Innovation and development are loosely broken into five categories as shown in the figure below. 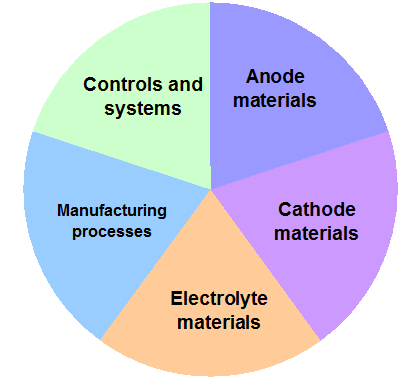 Developing new anode materials is one of the prime focus areas for several startup companies. This is aimed at raising the energy density beyond the wall that is now towering over the industry.  Companies such as Amprius, Enevate, SiNANOde are examples of startups focused on silicon-based anodes. Quantumscape, a spinout from Stanford University, is focused on a entirely new structure and material system with high dielectric constants. Envia seeks to develop higher voltage cathodes — by raising the voltage, one also raises the energy density. Lab demonstrations have been very promising at many laboratories but scaling to real-world production remains a tall task for these companies.

Electrolytes is another fertile area of investigation. Plenty of effort is aimed at replacing the liquid or gel-like electrolyte medium by a solid-state material with conductive properties for the ions. SEEO, Sakti3 and several other companies are working on launching batteries with solid-state electrolyte. It’s a promising area but serious limits still remain including scaling to cost-effective volume production.

Improving the design and manufacturing of batteries is also another area of great interest. Enovix is combining newer materials that can be deposited and manufactured using semiconductor-like processes. Imprint Energy seeks to screen print batteries in what should be a cost-effective and repeatable process.We, at Qnovo, are focused on clever control systems and software to open up the operating envelope of batteries.

There are tens of startups working on new battery technologies. Inevitably, I have missed in my brief list several others that are also leaving their mark on this field. Collectively, the contributions of all these companies will ultimately elevate energy storage to an entirely new dimension. It will take time but the goal is achievable.