58. SAMSUNG, BE HONEST IN YOUR MARKETING CLAIMS

Samsung announced in September 2014 its GALAXY Note 4, a giant but elegant 6-in screen smartphone with a specified battery capacity of 3,220 mAh. It also made a bold claim that it charges the smartphone to 50% in 30 minutes.  The marketing snippet below comes straight from their website. So, how honest is Samsung in their marketing claim of fast charging? Let’s find out.

We set out to test the Note 4 in our lab. We conducted charging cycles, measured the charging current into the battery as well as the battery capacity and the corresponding state of charge (the percentage the user reads in the top part of phone screen). The measurements were done with the accompanied Samsung fast charging adapter, with all wireless functions turned off, GPS and location services turned off, and the display turned off. These ensure that the current provided by the AC adaptor is entirely used for charging the battery and no other function. The smartphone was completely discharged before initiating the charging. The battery was deemed fully charged (100%) when the charging current dropped below C/20, or 1/20th of the rated capacity; this is equivalent to the charging current dropping to 3,220/20 = 160 mA. This metric is a commonly used standard of full charge in the lithium-ion industry. What were the measured results? 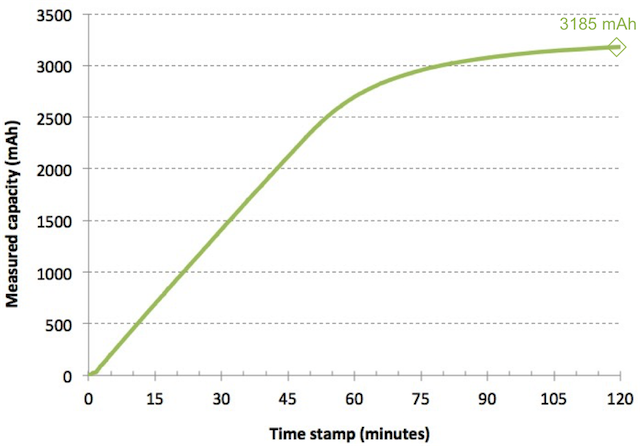 First, let’s look at measured battery capacity. We measured a full charge capacity of 3,185 mAh, or 99% of the specified capacity. This is as accurate as one can measure it. Kudos to Samsung for being honest about the capacity…but Samsung’s marketing and engineering departments decided to stretch the truth in their claims on charge time and state of charge. Let’s examine these next.

The first observation we make is that the fuel gauge reports 50% in 37 minutes, not 30 minutes as claimed by Samsung. Ok, Samsung, is 37 minutes equal to “about 30 minutes”? Perhaps if these extra 7 minutes don’t mean much to a patient consumer, but I can’t see how an end-user in a rush to catch their next connecting flight won’t notice these precious seven minutes.

The second observation is where the phone reports 100% full charge, or the total charge time. Focus your eye on the purple curve right about 90 minutes of charging time. Right there, the fuel gauge almost instantly jumps from 94% to 100%. In other words, the software in the Note 4 decides that 94% is full enough to “round it up” to 100%.  The actual full charge time, i.e., when the battery does reach its specified 3,220 mAh is 120 minutes, but the smartphone tells you (incorrectly) that it is fully charged a whole 30-minutes earlier! That’s nearly 200 mAh of capacity, or about 1 hour of usage, that you have been cheated. Ouch! Shame on you Samsung!

The third observation is that Samsung is using straight CCCV charging. Judging from these charts, their charge rate is approximately 0.75C, only a hair faster than the iPhone 6 or 6Plus which clock in at 0.7C.  So, are we now claiming fast charging at these low levels? Why can’t you promise the end users 1C or above, and then proudly advertise fast charging.