72. LET’S TALK ABOUT THE WAIST

Not yours, of course….the smartphone’s waist. We see a race among the smartphone makers to go thin. The iPhone 6 Plus is 6.9 mm thick and it is already been outflanked by some new devices coming from China. In particular, the Oppo R5 boasts a thickness of only 4.85 mm, and the Vivo X5 Max is an even thinner 4.75 mm. So what determines how thin one can go?

Naturally, the mechanics of the device are clearly one limiting factor…nobody wants their smartphone to “bend.” For the most part, manufacturers are now using hardened aluminum cases for added resistance to bending. With the exception of some early complaints about the iPhone 6 Plus, there have been no credible reports of additional bending failures. Another limiting factor is the touch screen. There have been some great innovation here, most of it related to fusing the touch glass with the display, thereby reducing the touchscreen thickness. For example, the AMOLED screen on the Vivo X5 Max is only 1.35 mm thick.

So that leaves the battery as the last frontier…why am I not surprised? The battery seems to consistently win the title of bottleneck, and this is the topic of today’s discussion. Why can’t we make batteries ultra thin?

The answer is actually “yes, we can.” Batteries can be made really thin, I mean thinner than you might imagine, sub 1 mm. But naturally, there are tradeoffs. The first tradeoff is that thinner batteries cannot boast the same energy density than their thicker counterparts — there is just too much “electrical overhead” (e.g., connectors, plates) that they become dominant when the battery is too thin. See this earlier post that shows the impact of thickness on energy density. For a smartphone device, somewhere around 3 mm is the lower limit of battery thickness. Some smartphone makers instead choose to go thick just to provide more battery capacity — the most recent example is the Moto X whose thickness is a whopping 11 mm, more than double Oppo’s thickness !!!! So the first tradeoff is battery capacity vs. stylishness. Judging from the market trends, stylishness seems to be winning for now.

There is also a second and very important tradeoff, and that relates to swelling. I described in a very early post what happens to the battery as it ages…it bloats, and consequently becomes unsafe. This “swelling” phenomenon, through which the battery physically grows, has two components. They are shown in the next chart. 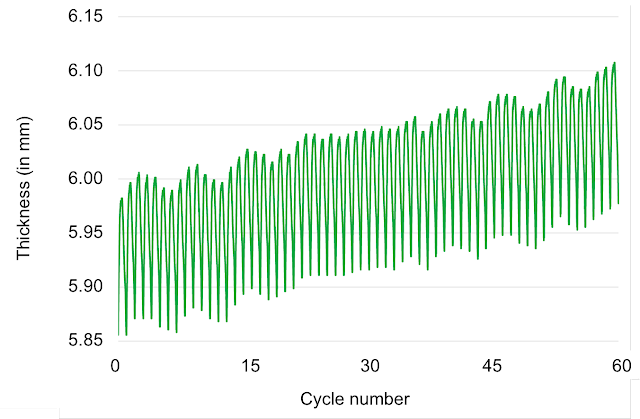 This chart shows the actual and measured thickness of a 3-Ah cell used in the LG G2 smartphone. It is a polymer cell and is embedded (i.e., non-removable) inside the mobile device. The thickness is measured over 60 cycles of charging and discharging. One readily observes two separate trends, almost like a yoyo on an escalator:

As a result, manufacturers of smartphones need to make an allowance inside the device for the battery cell to grow in time — this allowance is somewhere between 10 and 15% of the cell’s thickness, or up to 0.7 mm; quite a significant number. Failing to provide this allowance risks placing large pressures on the touchscreen and cracking it.