71. IS THERE ENOUGH LITHIUM?

Elon Musks’ Gigafactory comes on line in 2017 to build some 35 GWh annually worth of batteries for Tesla. Thirty-five giga….that sounds like a big number. But wait, thirty-five gigabytes is a small capacity for your disk drive. So let’s put things in perspective in this post. 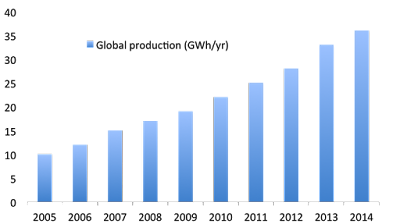 Tesla’s Gigafactory should be capable of producing by 2020 enough battery packs for some 500,000 electric vehicles. That corresponds to a capacity of about 75,000 kWh for each vehicle, with each pack including about 7,000 individual 18650 cells — see this earlier post on the battery pack of a Tesla S. Quick math reveals that the annual output of the Gigafactory equals a little less than 4 billion 18650 cells annually.  The annual worldwide production of lithium-ion batteries stood in 2014 just around 35 GWh, which means that Tesla intends to effectively double the global production — and this is only for making 500,000 cars. So this begs the question, will there be enough lithium to make all, and I mean all, cars on the road electric? Let’s explore.

First, let’s estimate the total usage requirement of lithium. An individual state-of-the-art 3-Ah 18650 cell weighs about 48 g, and contains on average a mere 2 g of lithium. The lithium is in a salt form suspended in a solvent (the electrolyte) or embedded in the cathode material, often a composite metal oxide of lithium (such as lithium cobalt oxide).  Therefore 35 GWh, or equivalently 4 billion 18650 cells, consume 7,900 metric tons of lithium.

But wait, lithium does not exist naturally in a metallic form — remember, lithium metal is reactive. Lithium is mined in the form of lithium carbonate; by weight, it is 5.2x heavier than lithium. In other words, the demand in 2014 corresponds to 41,000 tons LCE (in the lingo of the mining industry, LCE stands for lithium carbonate equivalent to account for other forms of mined lithium salts such as lithium hydroxides). With a selling price of $8,000 per ton (and rising), one can readily see that lithium mining for batteries only is a $320m annual business growing at 7-8% per year. That’s a pretty decent figure but it pales compared to the market size of other metal commodities such as copper. It’s worth noting here that lithium is used for several other applications such as glass manufacturing. In 2014, the total worldwide demand for lithium exceeded 100,000 tons LCE. The vast majority of presently operating lithium mines are in South America, in particular Chile’s Atacama salt flat and Bolivia. Increasingly, deposits in China and Canada, for example the Whabouchi field in northern Quebec, are being explored for further mining as demand and prices for lithium increase.

I still haven’t answered the key question: is there enough of it? Lithium is a very light element and is fairly abundant in the Earth crust — light elements formed early during the evolution of the Sun. The USGS estimates its abundance at 500 atoms per million atoms of Silicon (the most abundant element in the upper Earth crust), or about 0.05%. By comparison, it is as abundant as zinc and copper, and a million times more abundant than gold. We never questioned whether there is enough gold in the world, did we?

There have been no accurate studies to estimate the world reserves of lithium. SQM, the world’s largest lithium mining company, estimates that the world reserves stand near 100 to 300 million tons LCE, or equivalent to 2,400x the demand that the Gigafactory is expected to generate.

So the brief answer is: don’t worry, there is plenty of lithium. If you are a speculative investor, it may be a good time to buy land in Chile or Bolivia, at least what SQM and other mining companies haven’t bought yet. You see, 007 didn’t get it right in Quantum of Solace. The coup d’etat should have been to corner Bolivia’s lithium salt mines, not its water supply.