53. HOW YOUR BATTERY DETERMINES YOUR PHONE’S FASHION

Most of us recall the days of the flip phone, a mere decade ago, when the battery was small, a puny 800 mAh, yet it lasted days. Over these past several years, our phones got smarter, they got sophisticated, and the battery took the brunt of this evolution. While nearly every component inside the smartphone can boast of the power of Moore’s Law (doubling power every about 18 months), the battery is the only outlier that has been progressing at a snail’s pace. The result is that the battery is now the bottleneck in the evolution of mobile devices — hence the incessant complaints from end users.

So let’s look at the evolution of the battery in the last two years, and how it has impacted the design and functionality of the modern smartphone. The following chart shows the energy density in Watt-hours per liter (energy per unit of volume) plotted against the charge capacity (in A.h) for a survey of smartphones released in 2013 (red squares) and 2014 (blue dots). 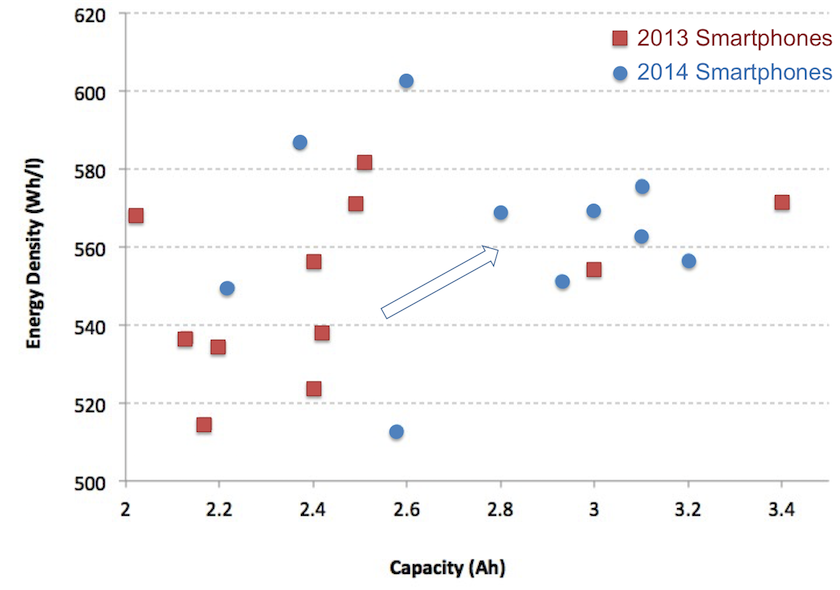 We observe two trends. The first trend is the migration of battery charge capacity to the right, in other words, the charge capacity increasing from about 2.5 Ah to about 3.0 Ah, or an increase of about 20%. This trend clearly gives the end user more battery life and hours of use per day. The second trend is that the energy density also has increased, from a range of 530 – 550 Wh/l to now a range of 560 – 600 Wh/l, or an increase of about 10%.

Now let’s give this a bit more thought. The capacity went up by nearly 20%, but the energy density went up by only 10%, so the difference had to be accounted for by an increase in the volume of the battery. In other words, the battery had to either get longer/wider or thicker. However, the fashionable trend is now for high-end smartphones to get thinner. Many smartphones are now dipping below the 7-mm thickness mark. For these thin devices, the battery had to grow in length and width, in other words, only large screen phones (greater than 5-in) can now accommodate these larger battery capacities, especially 3.0 Ah or more.

So in summary, the battery trends have had a huge impact on the form factor of the modern smartphone and its fashionable looks. In particular, because energy density is not keeping up with the rise in required charge capacity, the smartphones essentially got bigger. We witnessed in 2014 a rise in the number of smartphones that sport 5.5-in and even 6-in screens.