If you own a mobile device and in need to charge it, the first thing you do is to find a (or your) AC adapter with a USB cable, then plug it into the appropriate USB charging port on your device…et voila! Come back some hours later and your battery should be full.

It is simple, as it should be. But have you ever wondered what happens behind the curtains? I will cover some of these details in this and additional future posts.

So first, before we delve into the electronic circuitry responsible for charging the battery, let us examine the electrical characteristics of the lithium-ion battery during charging. The battery is a complex chemical device, but electrically, it can be simplified into a two-terminal component; in other words, there are two electrical values of importance to us: i) the voltage across the battery terminals, and ii) the current flow, either into (i.e. during charge) or out (i.e. during discharge) of the battery.

During the charging phase, one would expect the voltage to rise across the terminals of the battery from the “empty” level (typically around 3.3 V) up to the “full” level (typically around 4.2 V or 4.35 V depending on the type of battery). This is precisely what the next chart illustrates for a lithium-ion battery with a nominal charge capacity of 720 mAh. 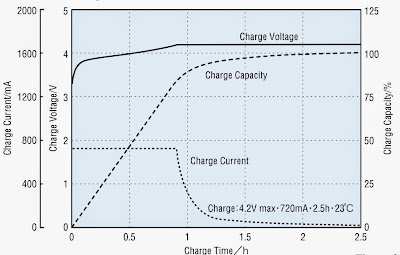 This chart of the battery’s charging characteristics looks rather busy but we can dissect it quite readily to glean some valuable information. Every lithium-ion battery, without exception, will have a similar chart, often included in its data sheet.

The right vertical axis shows the charge capacity (or SoC) as a function of charge time. It is shown in the long-dash curve. Zero is at zero, and 100% is reached after about 2.5 hours of charging.  The charging current itself is represented by the dotted line, and its values are on the far left vertical axis.

One can make a few key observations. First, the charging current has a steady value of approximately 720 mA, then begins to decay after less than one hour of charging. This first phase is called the constant-current (CC) phase; the second phase where the current is steadily decaying is called the constant-voltage (CV) phase. Some publications and blogs incorrectly label them as the “fast charging” phase and the “trickle charging” phase…this is absolute non-sense and illustrates total ignorance on the part of the writer. I will revisit this type of CCCV charging later — it is at the core of many ills that plague modern lithium-ion batteries.

The second observation we make is that the voltage of the battery indeed stays between 3.3 V and 4.2 V, but that somewhere around 50 minutes, the voltage is held steady at 4.2 V and remains there. This is precisely what the constant-voltage phase does; the internal charging circuitry will actually pin the charging voltage to a value of 4.2 V and keep it there until the charging is complete.

This maximum voltage value comes straight from the chemistry. At higher values, the electrolyte inside the battery begins to oxidize and decompose, thus posing a serious safety hazard. This is one of several reasons why an end user cannot, and should not, mix chargers (AC adapters) used for NiMH batteries and lithium-ion batteries. The voltages for each battery type are vastly different.

Finally, one wonders at what point is the charging process deemed complete? Naturally, you will say “100%”, but how is 100% defined? During the charging process, the convention is to halt charging when the decaying current reaches 1/20th of the capacity of the cell. In this particular battery, it corresponds to the current decaying to 720/20 = 36 mA. From the chart above, this is reached after 2.5 hours. But mobile device manufacturers are in a hurry and often fudge their numbers, so that’s why you will see the green light turn on much, much, earlier, shaving 30 or 45 minutes from the actual charging time.