I described earlier the two pieces of the fast charging puzzle. There is first the power delivery from the wall socket to your mobile device, and then there is managing the charging power into the battery so it does not get damaged.

The first piece of the puzzle is all about power circuitry, something electrical engineers enjoy and revel in. But the second piece of this puzzle is about managing the chemistry in the battery. Here, I have some bad news: electrical engineers, even the most successful ones, are likely to have scored a C- or a D+ on their chemistry college classes; in other words, they are not comfortable with chemistry. Like all of us humans, we drift towards our comfort zones, so chemists drift to chemistry, and electrical engineers drift to building electronics. Getting the two disciplines to work together takes hard work and lots, really lots, of discipline. As a result, it is rare to find interdisciplinary development in the mobile world, especially between battery chemistry and electronics. We, at Qnovo, happen to be one of these rare exceptions.

Well, enough self-promotion; let’s get back to real life. What happens if overzealous electrical engineers decide to charge a battery as fast as they can. After all, they are electrical engineers and know how to design circuits that can pump a lot of energy in the battery — some even give it great names like Quick Charge. The result is simple: They will destroy the battery (if you use CCCV charging). The data in the next graph illustrates the extent of the damage. 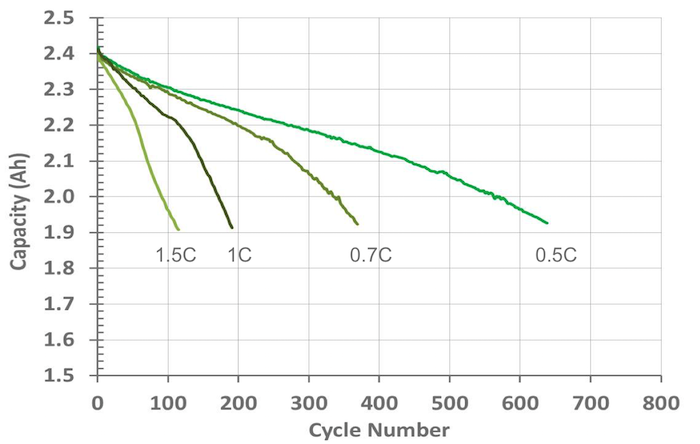 The graph is a standard capacity fade curve for a battery. In this case, it is a 2,400 mAh lithium-ion polymer battery from one of the leading manufacturers. The vertical axis shows the remaining capacity of the battery (in Ah) as the battery undergoes cycling (shown on the horizontal axis).  As the battery is repeatedly charged and discharged, it loses its ability to hold charge, hence the degrading curve. This graph shows the capacity degradation for four distinct charge rates, varying from a slow 0.5C up to a superfast 1.5C, all using CCCV. At 0.5C, the battery charges in about 3 hours, and at 1.5C, it charges in a little over an hour.

So what is the graph telling these overzealous engineers? It says that at the slow charge rate, the user will comfortably obtain over 600 cycles of operation. That’s plenty to cover a year and more. But the superfast charge rate of 1.5C does so much damage to the battery that the battery will barely last a couple of months. In other words, fast charging with CCCV is bad! Isn’t time to use new methodologies that give us fast charging without damaging the battery.

The moral of this post: Don’t trust everything your electrical engineers tell you…well, that is unless they really scored A’s on their chemistry college courses!