I doubt that anyone will resist fast charging from becoming standard. Once a norm, I also doubt anyone will even refer to it as fast charging. The comparison then becomes one between “normal charging” vs. “slow charging.” This is a day we should all look forward to.

It merits a post on measuring and reporting charge times. Given the lack of standards, the temptation is substantial to “round down” charge times and project numbers that are better than actual. At the end, of course, consumers are savvy and will not be fooled by such gimmicks.

First, how can you measure your own charge time? It’s quite simple. Discharge your smartphone or mobile device battery to near zero (say 1% of remaining charge). Dim your screen if you must keep it on, set your device on “airplane mode”, and shut down the GPS (location finder) and all operating apps; you want all the power to the phone to go into charging the battery. Mark the start time, connect your device to the charging AC adapter, then record every 5 or 10 minutes the percentage read by the fuel gauge. After your mobile device reports that the battery is fully charged, you will make a chart: on the vertical axis, show the measured percentage of charge in the battery, and on the horizontal axis, show the recorded time. You will get a graph that looks like the one below. 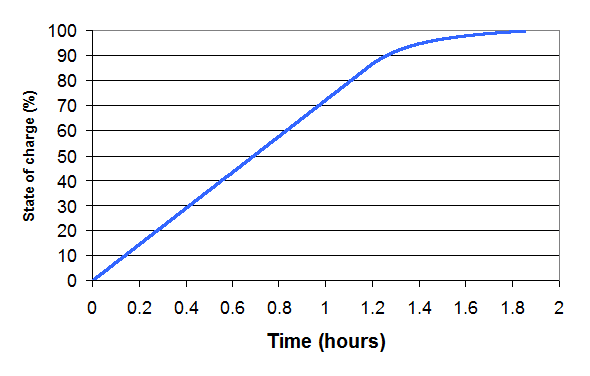 This particular chart includes data specific to a battery with a capacity of 2,500 mAh charging at a rate of 0.7C using a 9-Watt AC adapter. You will notice that the charge increases monotonously for the first hour or so, then near a charge level of 90%, it slows down quite a bit. For the readers who are technically inclined, this transition happens when the battery voltage reaches its maximum value of 4.35V, and the charging switches to a slow constant-voltage phase.

Let’s plot this chart in a little different way. The following chart shows, for the same battery above, the amount of time required to charge the battery in small increments. It takes about 8 minutes to charge the first 10%, and all subsequent increments of 10% until the battery reaches the transition point. And then, the charge rate really slows down to a dismal 35 minutes for the last 10%. Worse yet, it takes nearly 15 minutes to charge from 98% to 100%. This is quite a bit given that the entire charge time is about 2 hours.

This is precisely when the opportunity and temptation to cheat are greatest. Many smartphones actually declare they are full when they are near 98% of charge thus saving 15 minutes from the actual charge time. Now, one may reasonably argue that the difference between 98% and 100% is miniscule, and that is indeed true. But beware of making comparisons among different mobile devices by looking at their 100% charge times. They are likely to be inconsistent. Instead, you are better trusting the charge times at lower charge levels, say to 50% and to 80%. There is far less room to manipulate these figures.