The National Transportation Safety Board (NTSB) released today its incident report on the battery fire that led to the grounding of the Boeing 787 fleet for many months. It is a thorough report, nearly 100 pages long, that examines in great detail all aspects of the lithium ion battery and its systems. The result is shared responsibilities for the battery fire, with blame targeting GS Yuasa, the Japanese manufacturer of the lithium ion individual battery cells, and Thales, the French system integrator responsible for the power conversion subsystem, as well as Boeing. Even the FAA shared some of the blame in how it managed the certification process.

The report reserved special blame on the poor design, test and manufacturing practices at GS Yuasa. In essence, the NTSB reports that defects in the assembly and manufacturing of the cells led to internal shorts in the battery. Inadequate testing during certification throughout the chain did not catch these problems. Specifically, these defects led to shorts and consequently thermal runaway in cells 5 and 6. The battery contained a stack of 8 cells connected in series for a nominal voltage of 29.6 Volts.  CT scans and disassembly of defective batteries showed the failure points — defects in the form of protrusions or wrinkling in the cathode-separator-anode winding that effectively created minute electric shorts between the cell’s terminals.

The first figure below shows a schematic from the NTSB report of the design of an individual cell. It consists of a sandwich of the lithium cobalt oxide (LCO) cathode layer, the separator layer, and the carbon anode layer. Aluminum and copper foils act as the electrical conducting planes for each of the cathode and anode, respectively. This material construction is nearly identical to the ones used in the consumer industry. These layers are then folded together to form the cell windings. 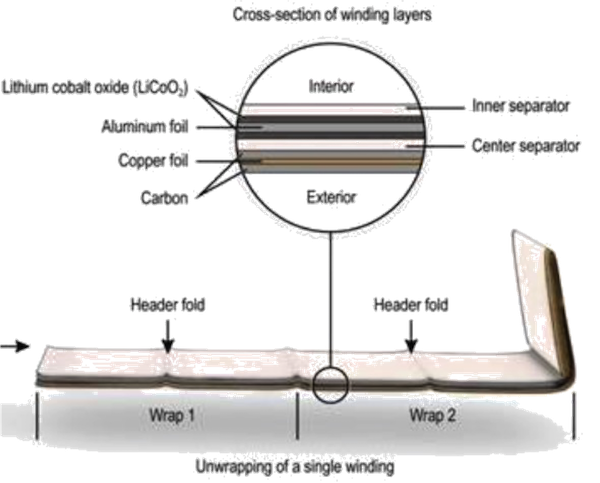 The next photograph shows how the cell windings are flattened before insertion into the metal packaging can. The NTSB pointed to this winding formation and flattening process as one of the culprits in the origination of the defects and shorts. This manufacturing process created wrinklings; this is a highly technical term referring to the buckling of the electrode foils, thus compromising their integrity right during the cell manufacturing steps. Additionally, the NTSB found that the electrolyte filling process was inconsistent with the practices used in the industry and possibly led to the incomplete formation of the SEI layer (it is a thin layer that forms between the anode and the electrolyte). In other words, the NTSB pointed a clear finger at the poor cell manufacturing at GS Yuasa. 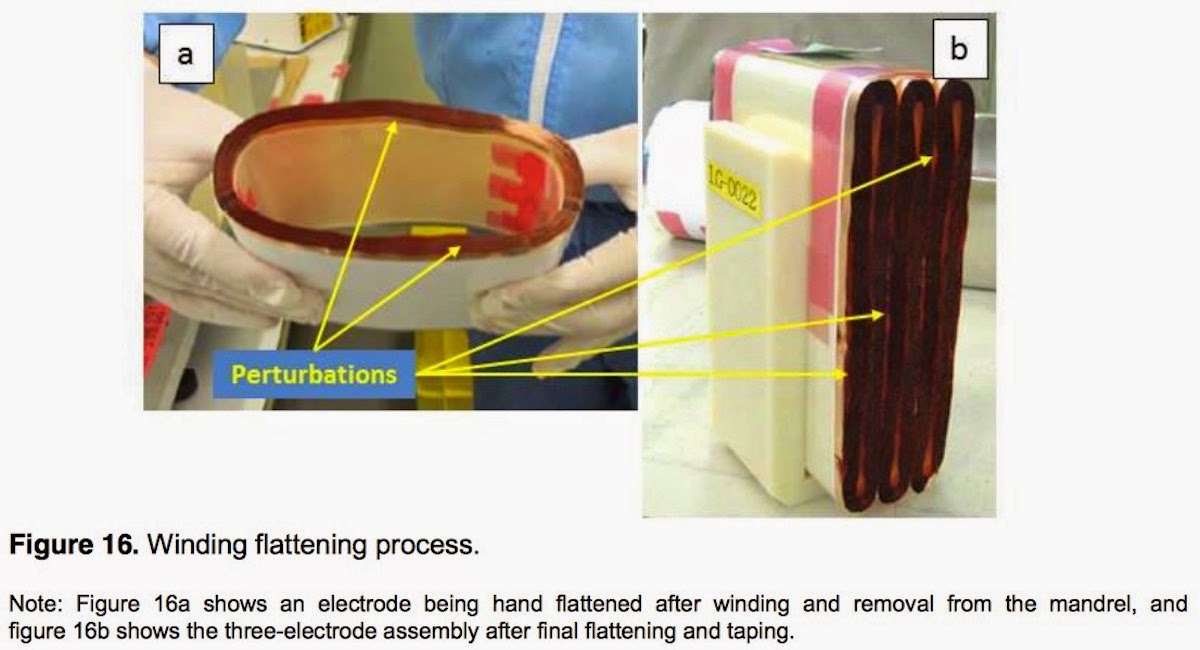 So why weren’t these defects caught during the test and certification phases? Well, apparently the battery that made it on the actual B787 airplanes was different in design and properties from the batteries that underwent the tests. It seems that lots of heads at GS Yuasa and up the food chain to Boeing will be rolling — if they have not already. Shame on the engineers and the managers who supervised and led this process.