24. THE BATTERY INDUSTRY IS HITTING THE WALL!

I am an avid photographer. I have been one for a long time. My first camera was vintage ca. 1968. Its body was simple. It had a mechanical shutter; no battery; no metering; no autofocus….but I was proud of the lenses that I accumulated over the years; I labored summer jobs to pay for my expensive lenses. Photography was all about the quality of your lens. Photography was also only for the few who really cared about photography.

Fast forward to 2014. Your average smartphone has a built-in camera. The cameras in an iPhone 6 or 6 Plus or a Sony Xperia Z3 are exceptional. They make it easy for the average consumer to take exceptional photographs. We democratized photography: these simple cameras made photography readily accessible and easy to use for the masses.

Yet, the quality of the optics in these new built-in cameras are nowhere the quality of the lenses in our earlier SLR cameras. To begin with, they are far smaller…and in optics, small = bad! They are also far cheaper. So, how is it that they can take such great photographs?

You see, every smartphone includes plenty of computational power, far bigger than the PCs of earlier eras. These modern built-in “cheap” cameras contain a substantial amount of intelligence and computation that correct many errors from optical aberrations in the lenses to handshake and color purity. Lenses in today’s smartphones are not of the highest optical quality, yet the errors in the optics are more than compensated for by the electronics and software in your smartphone. The result is staggering: Lower cost, higher quality photography.

Is there an analogy here to batteries? yes, of course.

The lithium-ion battery industry is losing steam in its quest to increase energy density. For several years, it has been humming along at an annual growth pace of 6% — which incidentally has proven to be insufficient to keep pace with the need of mobile devices. Now, the materials used in the lithium-ion battery are reaching their theoretical limits. A breakthrough in materials is needed, yet, while some technologies are promising, little is on the immediate horizon for commercial release. Manufacturing processes have also gotten more complex and more expensive. But the industry cannot sustain higher-priced batteries. New and small battery vendors out of China are providing batteries with lower quality but also far lower price points.

The large and main battery vendors are trying hard to push the limit on energy density and are often coming up short. Instead they resort to compromises, living the whack-a-mole life. To get more energy density, they sacrifice cycle life. To gain cycle life, they sacrifice charge times….etc. Additionally, manufacturing billions of batteries with tight quality is becoming challenging. Unlike integrated circuits where manufacturing is incredibly reproducible, no two batteries are ever born equal; there are significant manufacturing variations from battery to battery, even from the same factory and the same manufacturer.

The graph below shows statistics on a dozen batteries of the same type and vendor, all from a smartphone model made by a well recognized manufacturer. Nominally rated at 2,500 mAh, this distribution represents the spread in capacity after only 500 cycles (or a little over a year of use); yet these batteries were all supposed to be the “same.” The spread is enormous and highlights the manufacturing variations in batteries. This graph also tells you a scary story: you may be unlucky and  have a battery in your smartphone with nearly 1,800 mAh of remaining capacity after some use, not the 2,500 mAh that you were promised initially! 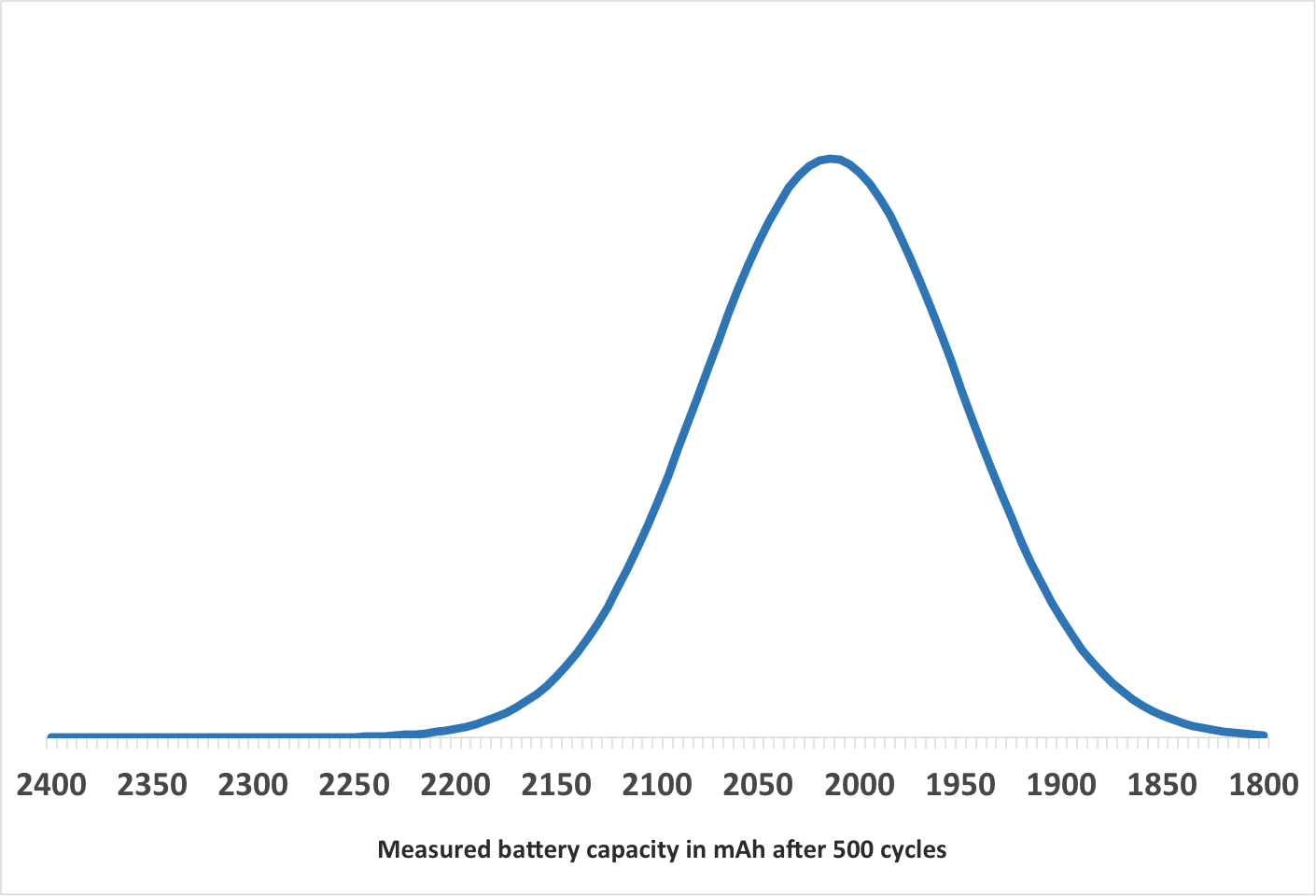 So no surprise that the large handset manufacturers are growing frustrated with the large battery manufacturers. Several of them are taking matters into their hands. It is no secret that Apple has been hiring battery engineers for several years now.

Yet, what remains puzzling is that the battery industry cannot seem to learn from other industries, for example, from the camera industry. There is an enormous opportunity to enable algorithms and software solutions that can correct for the shortcomings in batteries. For example, use algorithms that can adapt to manufacturing variations in the battery and increase its cycle life and reduce its charge time…in other words, shift the burden away from improving manufacturing and materials to computational algorithms that can correct for some of the battery’s shortcomings. After all, there is plenty of computational horsepower available, and it is quite inexpensive.

But why is it that battery vendors are not taking the initiative here ? There is no hard evidence but I suspect two reasons. First, such new solutions require a new set of skills bringing together battery chemists and software engineers. The main large battery manufacturers lack this particular combination. I reckon this is not easy to accomplish — it took us a while to build our multidisciplinary battery+software team of engineers at Qnovo, and build a culture of collaboration between these two disciplines. Second, the established battery vendors have a long legacy of building chemistry and chemical products. This operational discipline is immensely respectable. But it is their operational success that is also their Achille’s heel; their past culture makes it difficult for them to explore radically alternative solutions than the ones they have been accustomed to for the past decades.

The path that the battery industry has been on is facing serious challenges. The frustration among consumers and handset manufacturers about the battery will not disappear. It’s only getting worse. This industry is ripe for some serious innovation.