We have seen time and time again: the consumers’ #1 priority is the battery. That’s right, not 4K video, not 40Mpixel cameras, or a power button to operate with your middle finger…it’s the battery. So let’s see how the leading models of 2014 fared on battery life.

I put side by side the iPhone 6 Plus against the major Android phones, namely the Galaxy S5, Sony Xperia Z3, LG G3, Moto X, HTC M8 and a newcomer, the OnePlus One. Let’s plot for each of these smartphones the measured use time, specifically, the numbers of hours each device lasted in web viewing over LTE. This is a fairly good estimate of the battery life. On the horizontal axis, I show the battery capacity in mAh. So what observations can we make? 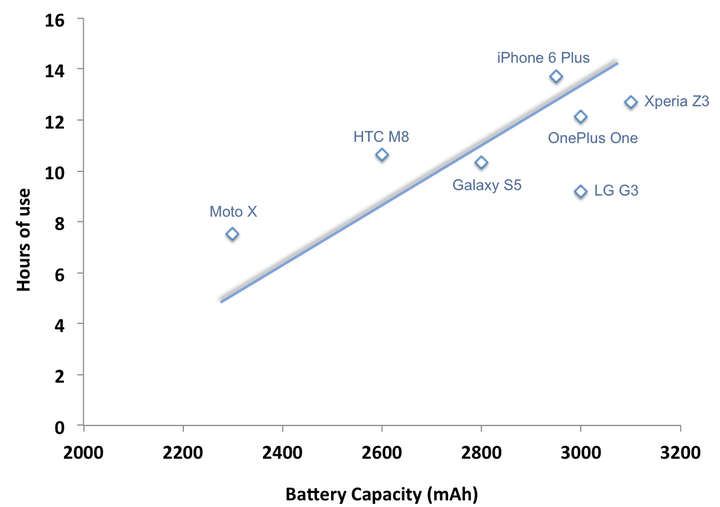 First and foremost, what is plainly obvious to all mobile device users: The bigger the battery capacity, i.e., the more mAh, the longer your device will last. The Moto X has the smallest capacity, and the Xperia Z3 has the largest capacity. Yes, you guessed it, the Z3 outlasts the Moto X by nearly 5 hours!

Second, we see that there is a kind of linear relationship between capacity and hours. This is math lingo that says that if we increase the battery capacity by a factor of two, then the hours of use will also increase by the same proportion, in this example, also a factor of two. There are some small exceptions but in general, this says that there are no games one can play: it’s a one for one relationship between battery capacity and hours.

So given that all of these phones offer nearly the same screen size (5 to 5.5 inches), why is it that these different manufacturers have such disparities in their batteries? Why don’t they standardize? After all, they all use the same radio chips and processor chips…why do they tinker so much with the battery with so little to show for?

Unfortunately, for these engineers, it’s a game of whack-a-mole. If they increase the capacity, as Sony  did with their Xperia Z3, then they need to drop the charge rate. The Sony Xperia Z3 has one of the slowest charge times in the industry. Motorola engineers went in the opposite direction. They decided to charge faster than their competition, but to do so, they had to drop the capacity to a measly 2300 mAh, making the Moto X the phone with the worst battery life.