I just returned from travel in China. The Chinese airport authorities take very seriously the transport of lithium ion batteries on board of commercial airliners. If a passenger is carrying an unknown or unlabeled or improperly marked lithium ion battery in any form, the authorities will confiscate the battery. I saw a disposal bin past the security check point at Beijing Airport that was full of confiscated battery packs.

1. Can the design of the lithium ion battery make it inherently unsafe?

Absolutely! There are countless stories of battery factories that have caught fire in the past decades. The fundamental reason is that lithium metal (not as ions, but as lithium metal in the form of Li2) is highly flammable in the presence of oxygen or water vapor, both abundantly present in air. Therefore, it comes down to assessing whether the design of the battery can allow the formation of lithium metal inside the battery. Unfortunately, as energy density increases, battery manufacturers are forced to pack more material into the electrodes and compress the battery into smaller volumes. One of  unintended consequences of this trend is increased risk of lithium plating.

For readers who are technically inclined, lithium plating occurs when the voltage of the carbon anode relative to a fictitious lithium reference electrode approaches zero. I explained in an earlier blog the potential contribution of each electrode. Let’s re-examine this graph once more. The voltage of the anode is shown in red. Lithium plating happens to the right side of the chart when the graphite is getting filled with lithium ions. Inherently robust designs adjust the geometry of the cathode relative to the anode so that full battery capacity never coincides with an x = 1.0. In other words, the battery is full of charge (i.e., 100% of charge) but the graphite anode is actually at x < 1.0, thereby ensuring that the lithium plating threshold is never reached. The trick, from a battery design standpoint, is to also not sacrifice energy density. This dilemma, avoiding lithium plating vs. increasing energy density, is where battery designs tend to trip and become sensitive to lithium plating. 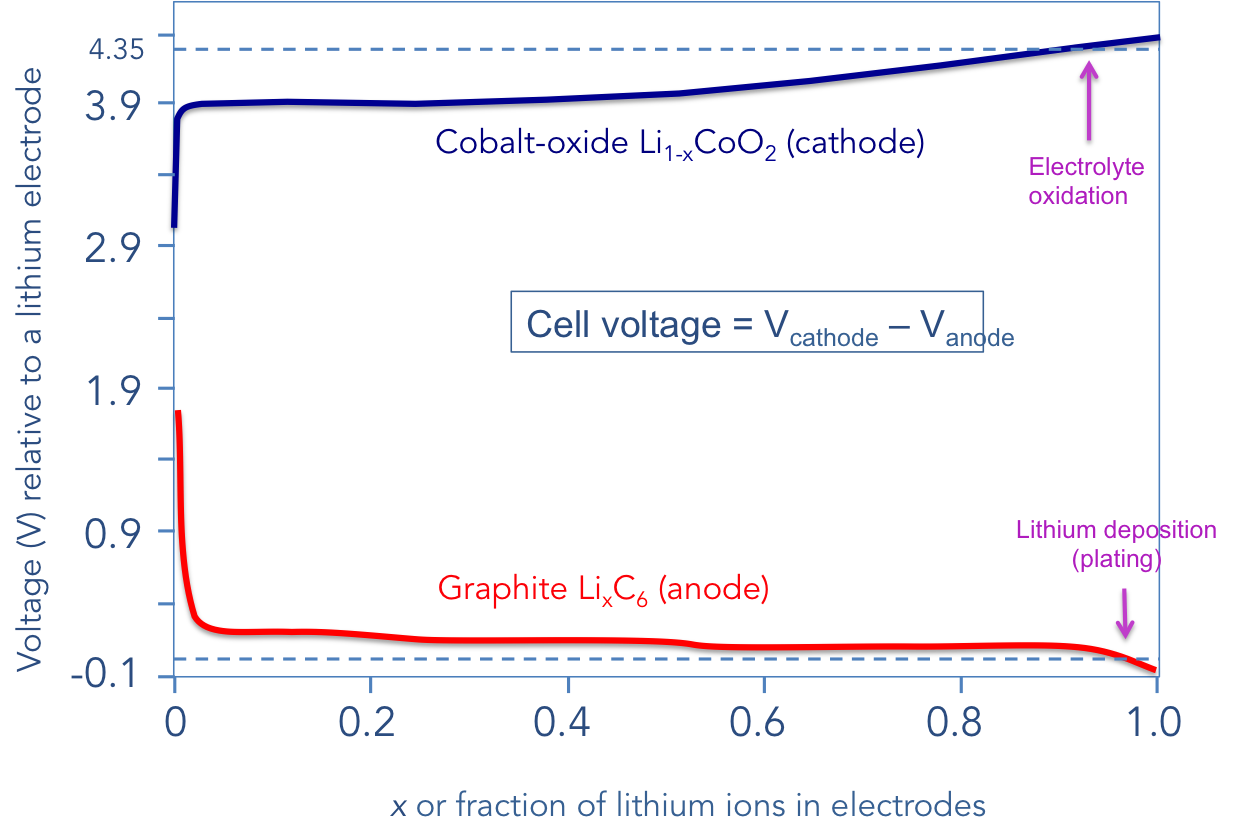 Absolutely! Even a well-designed battery, in other words, one that is designed to be safe within some given parameters, can be operated in an unsafe manner. Three examples of bad operation come to mind:

i) Charging the battery to voltages above its rated maximum, often 4.35 V: When this happens, the cathode voltage increases above 4.35V and the anode voltage drops below zero, thereby causing lithium plating.

ii) Charging at high charge rates using CCCV or some derivative of CCCV: The high charging current, if not applied properly with the right control algorithms, can also cause the anode voltage to dip below zero and result in lithium plating.

iii) Charging at low temperatures: As the battery temperature drops below 10 °C, the electrolyte becomes viscous, think of gummed up, and consequently, the ions have difficulty in making their journey from the cathode to the anode. This also creates the conditions necessary for lithium plating.

Fortunately, modern battery protection systems are there to ensure that these unsafe operations are not allowed — that is if they are well-designed; hence I suspect the origin of the caution by the Chinese airport authorities.

Lastly, one might ask: If the lithium plating happens inside the sealed battery and is never exposed to air, why is it a hazard? The answer is quite simple. Lithium metal plating will grow in time as the battery is used. Once this metal deposit or dendrite grows sufficiently long, it will form an electrical short between the anode and the cathode….and boom, catastrophic failure ensues.