NASA landed in July 1969 the Apollo 11 on the surface of the moon. Along with the famed astronauts was the Apollo Guidance Computer (AGC), a 1960s-era computer to navigate the spaceship to the moon and back.  A reliable machine for its time, it stands today only as a relic. A modern smartphone, for example the  Apple iPhone 6, is about 25,000 (yes, thousand) times more powerful, yet a a tiny fraction of the cost and size of the AGC. This early computer had to be powered by three gigantic silver-zinc primary (non-rechargeable) batteries with a total capacity of 3.4 kWh (enough to power a modern house), whereas the iPhone 6 takes its power from a modest 7 Wh rechargeable battery. This picture puts into perspective the marvel of modern electronics: in essence cheaply packing immense computational power into a small volume, and drastically changing our daily lives. As we have peeked in the past inside a Tesla electric vehicle, let’s take a closer look at the inner working parts of the iPhone 6, an icon for modern smartphones.

This blog is not about making another teardown of the iPhone 6 — these are abundant on the internet. Instead, I will build on them to give you additional insight into how these various components tie together, and ultimately, how they relate to power consumption and battery use.  Opening an iPhone 6 reveals, in addition to the battery and display, a printed circuit board, called the main logic board, that includes a large number of integrated circuits (IC) and other small components. This is the “brain” (so to speak) of the mobile device, and is responsible for the bulk of its power usage. Let’s take a closer with photographs of the front and back sides, then begin to decipher the various sections and their functions. 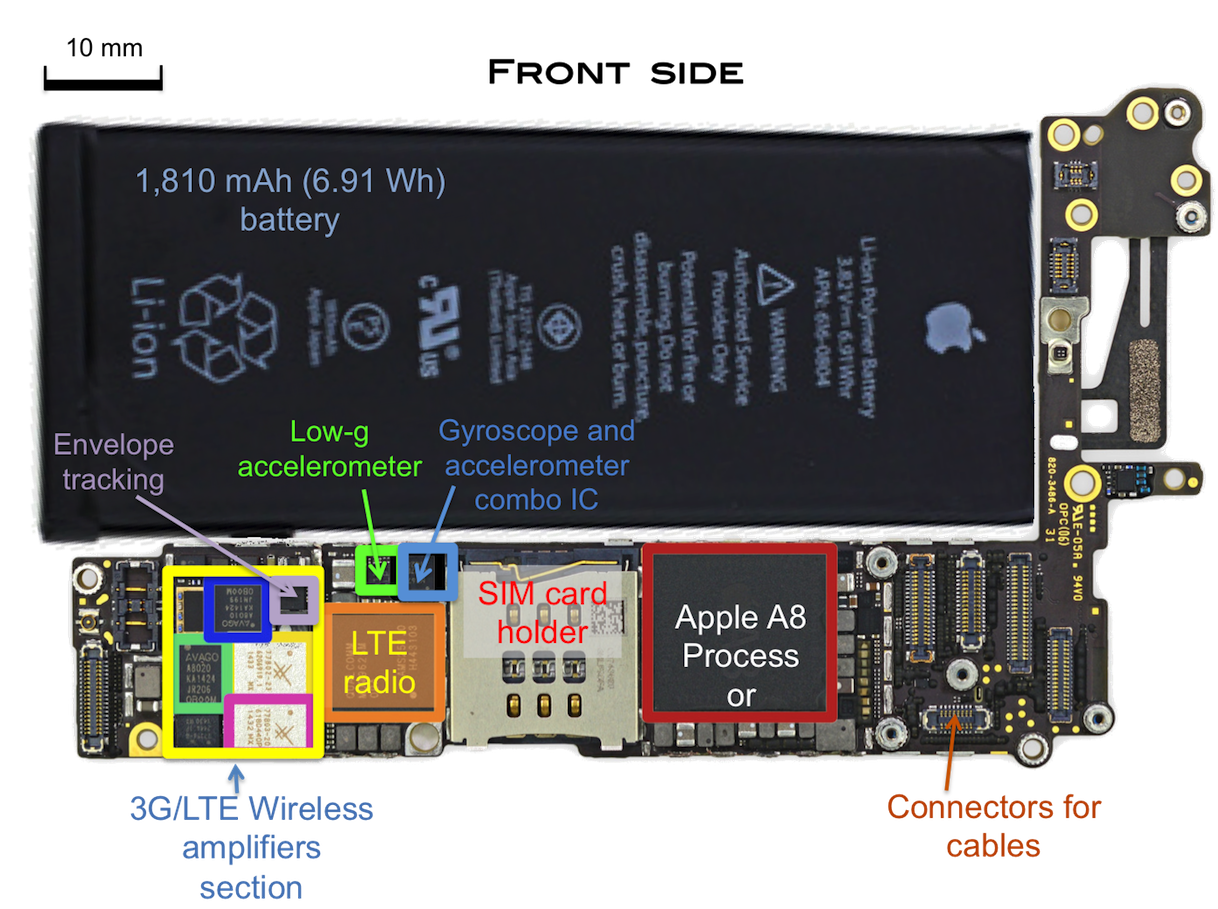 First, one observes that the battery takes up a substantial space of the mobile device. This is exactly why energy density is so important. Space, hence volume, is limited yet the energy demand on a mobile device is increasing. This dictates that energy per unit volume, i.e., energy density should increase, at least as fast as the energy demand of the device will in the foreseeable future. That has been and will continue to be a challenge for the industry.

Next, one observes some obvious large sections. One the front side, the main processor, the Apple A8, is very noticeable and takes up a significant part of the logic board. What you see is actually a little module that incorporates the A8 processor chip along with its 1GB of RAM (memory). At its peak operation, this processor can consumer several watts of power as I discussed in an earlier blog. The nanoSIM card holder is also quite substantial.

To the far left of the A8 processor is the wireless section highlighted in the yellow rectangle. This is where the wireless radio frequency (RF) signal is received from the antenna, then amplified before being read by the electronics, and in the opposite direction, amplified before being transmitted by the antenna. These power amplifiers (because they increase the power of the incoming signal) are provided by companies such as Avago, Skyworks and RF Micro Devices; they  are also responsible for significant power consumption (i.e., heat) with the mobile device (up to several watts), especially if the cell tower is distant. One also notices a small chip called envelope tracking. This particular IC is made by Qualcomm (QFE1000) — albeit there are several other suppliers too — and is responsible to adjust the voltage supply to these power amplifiers only to the amount needed to efficiently operate them; the result is some nominal power savings and less heat generation. Envelope tracking did not exist a few years ago; this added chip (and ergo cost) is strictly to help conserve the limited battery resource.

At the core of the wireless functionality is the LTE multimode baseband chipset made by Qualcomm (MDM9625M) shown in the photograph above by an orange rectangle labeled “LTE radio.” It is responsible for managing, encoding and decoding the wireless signal, both data and voice, on the 3G and LTE bands, and do it at an extremely fast speed — 150 Mbps in this particular case. This type of products is big business for companies like Qualcomm, Intel and MediaTek.

Above the Qualcomm baseband chip one finds a gyroscope and accelerometer combination chip made by Invensense (MP67B). This MEMS device incorporates a total of 6 sensors: 3 accelerometers to measure acceleration in the 3 basic directions, and 3 gyroscopes to measure rotation. The  teardown also identifies a 2-dimensional low-g (i.e., sensitive) acceleration sensor from Bosch (Sensotec BMA280). I suspect that is the inclinometer — it can tell which orientation the screen has been tilted.

The back side of the logic board is home to a number of functions, some visible to end users, and others less so but equally critical. Let’s start with the visible functions.  First, there is the M8 coprocessor. This is a low-power ARM processor that can handle basic functions like motion without the need to wake up its more power-hungry big brother (the A8). There is also the flash memory for data storage — this is where you store your music and photos. Then, there is the WiFi module, built by Murata (339S028). It provides fast WiFi connectivity 802.11a/b/g/n/ac. That same module appears to also provide Bluetooth connectivity.

Apple Pay functionality is centered around the NFC module which includes both NFC wireless connectivity (that’s the wireless link between your iPhone and the payment station) as well as the secure element that Apple says provides the encryption behind this secure payment method.

Now we transition to lesser visible but quite critical functions. The touchscreen controller made by Broadcom (BCM5976) handles the display functions including reading the finger swipes on the screen. There are also two power management integrated circuits (called PMICs), a primary one made by Dialog Semiconductor and another one made by Qualcomm (PM8019). The primary PMIC provides a number of critical functions such as providing voltage rails to the logic board as well as battery charging. This is also where the primary battery management functions tend to reside though details tend to vary across PMIC suppliers. It is likely that the PM8019 provides and maintains the voltage rails specifically to the Qualcomm baseband chipset. It is not clear whether the fuel gauge functionality is integrated within the Dialog PMIC or whether it is integrated into another fuel gauge chip within the battery itself (and hence not visible by this particular teardown). Public teardown reports of prior iPhones and MacBooks have shown that Apple tends to place the fuel gauge, often made by Texas Instruments, right on the connector cable between the battery and the logic board. It’s not clear whether the iPhone 6 follows this same architecture.

Naturally, what a teardown fails to reveal is the richness and depth of embedded software that resides with the multitude of chips on the logic board. Many of these chips above have some type of intelligence on board; of course, the A8 processor is by far the most capable, but even the NFC chip has a small processor (called a controller) on board, and it too needs a certain amount of intelligent software to have it run efficiently.

While the iPhones have been some of the most observed and torn down smartphones, the concept of high density integration applies to all modern smartphones. The space is tight and cost is paramount, and that will continue to drive innovation in this market. In parallel, and equally important, there is a race to implement ever more intelligent software to extract the most performance and operation from the immense amount of computational power that now resides inside a mobile device. Richard Feynman’s challenge in 1959 on “There is plenty of room at the bottom” can now take on a whole new meaning and aspiration.